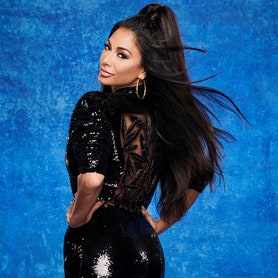 Nicole Scherzinger is a Grammy Award-nominated singer, songwriter and solo artist who was a member of one of the biggest-selling female bands of all time, The Pussycat Dolls. She has sold millions of records around the world and her versatility as a performer has brought her to stages across the globe, from stadiums to London’s West End, where she garnered a nomination for an Olivier Award for Best Actress In A Supporting Role in “Cats.” In 2018, she was personally invited by Andrea Bocelli to perform alongside him during his two sold-out shows at Madison Square Garden. She was a judge on both the U.K. and U.S. versions of “The X Factor,” playing an influential part in the formation of international successes, such as One Direction and James Arthur. Along with her role on FOX’s THE MASKED SINGER, she is a judge on “Australia’s Got Talent.” Outside of entertainment, Scherzinger is an ambassador for UNICEF and a Global Ambassador for the Special Olympics.