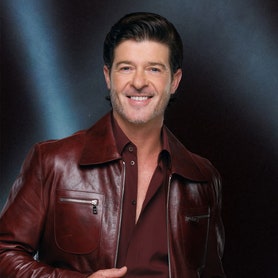 Robin Thicke is a five-time Grammy Award nominee, Diamond-selling performer, actor, entrepreneur and philanthropist. Since the launch of his solo career in 2003, after writing for everyone from Michael Jackson to P!nk, Thicke has notched multiple Gold and Platinum certifications and consecutive Top 5 bows on the Billboard Top 200. His sixth album, 2013’s “Blurred Lines,” crashed the Billboard Top 200 at #1 and produced the RIAA Diamond-certified title track “Blurred Lines” [feat. T.I. & Pharrell]. The song made history, holding the #1 spot on the Billboard Hot 100 for 12 weeks. Thicke also was the first artist since 2012 to simultaneously occupy the #1 spot on the Hot 100 and Top 200, putting him in an elite group of 17 other acts to accomplish this feat in the previous decade. In addition to his role on THE MASKED SINGER, Thicke recently released his first studio album in six years, “On Earth, and in Heaven,” which includes the No. 1 single on the Billboard Album R&B Songs Chart, “That’s What Love Can Do,” as well as the current Top 5 radio hit, “Look Easy.”