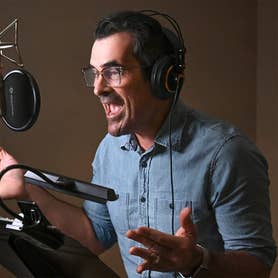 Burrell’s voice work includes “Finding Dory,” “Storks” and “Mr. Peabody & Sherman.” His additional film credits include “Rough Night,” “Muppets Most Wanted,” “Butter,” “Goats,” “Morning Glory,” “The Incredible Hulk,” “National Treasure 2,” “Fur: An Imaginary Portrait of Diane Arbus,” “Friends with Money,” “The Darwin Awards,” “Down in the Valley,” “In Good Company,” “Black Hawk Down,” “Dawn of the Dead” and “Evolution.” His additional TV credits include the streaming series “Boondoggle,” for which he was nominated for a 2017 Emmy Award for Outstanding Actor In A Short Form Comedy Or Drama Series.

In 2014, Burrell signed an overall deal with 20th Century Fox Television. Under the pact, Burrell launched his production company, Wedding Punch, to co-create and write comedy projects, as well as develop shows from other writers. On stage, he starred in Caryl Churchill's “Drunk Enough to Say I Love You” at the Royal Court Theatre in London. Additional theater credits include “Burn This,” opposite Edward Norton, Catherine Keener and Dallas Roberts; The Public Theater's production of “Richard III”; and Paul Weitz's “Show People” at Second Stage Theater. Burrell has been a longtime supporter of Kids In The Spotlight (KITS), which trains youth in foster programs and other under-served youth to create, write, cast and star in their own short films.