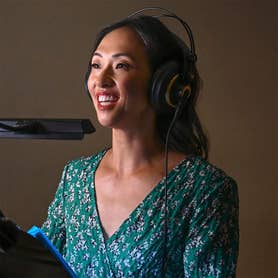 Raised in Olympia, WA, Joy Osmanski graduated from the M.F.A. acting program at the University of California, San Diego. Her work in television and film includes appearances as a series regular or guest star on shows, such as “The Loop,” “Shameless,” “The Fosters,” “Santa Clarita Diet,” “It’s Always Sunny in Philadelphia” and animated series “Family Guy,” “American Dad” and “Allen Gregory.” Currently, she can be seen as “Paula Brooks/Tigress” on the DC Comics series “Stargirl.” She can be heard as the split-personality “Failsafe” in the video game “Destiny 2,” and has narrated more than 125 audiobooks, winning multiple Earphones Awards. She has been seen onstage at the Mark Taper Forum, La Jolla Playhouse and Actors Theatre of Louisville.