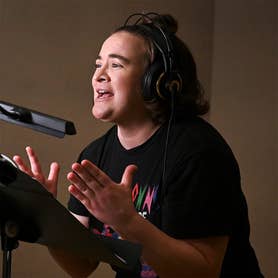 Betsy Sodaro is an actor and comedian from Colorado. She is known for appearing in television shows, such as Chuck Lorre’s “Disjointed,” “Big Time in Hollywood, FL,” “Another Period,” “Drunk History,” “Animal Practice,” “Superstore,” “Brooklyn Nine-Nine,” “Dr. Ken,” “Speechless” and, most recently, “Ghosts.” Sodaro also has done voices on many animated shows, such as BOB’S BURGERS, “All Hail King Julien,” “Tuca & Bertie,” “Human Kind Of,” “Glitch Techs,” “Big City Greens” and “Big Nate.”

On the feature side, she has appeared in “Monsters University,” “The To Do List,” “Don’t Worry He Won’t Go Far on Foot,” “Trolls World Tour,” “An American Pickle” and “Hubie Halloween.” She currently can be seen in the film “Golden Arm.”