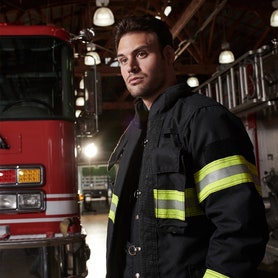 Born in Texas and raised in his hometown of Sacramento, CA, Ryan Guzman developed an interest in martial arts at the age of seven, and earned his first black belt in Tae Kwon Do by the age of 10. This led him into the octagon as an MMA fighter in Sacramento.

A gifted athlete, he also was a sought-after left-handed pitcher with a fastball clocked between 87-90 miles per hour. A shoulder injury led him into a career in print modeling and then acting. Guzman worked successfully in San Francisco, starting with LOOK Modeling Agency at the age of 18. At the age of 22, he joined the Wilhelmina Agency in Los Angeles.

Guzman has since starred in television commercials for Old Navy, Gillette, Candies and the Oprah Winfrey Network. He has modeled for Abercrombie & Fitch, Affliction and Reebok, among others. After success in modeling, Guzman transitioned to acting as the male lead for the feature film “Step Up Revolution.” He followed the movie’s success with another lead role in the independent film “Beyond Paradise” and supporting roles in “There’s Always Woodstock” and “April Rain,” and later reprised his role in “Step Up: All In.”

His additional feature credits include “The Boy Next Store,” opposite Jennifer Lopez, and directed by Rob Cohen; the live-action movie “Jem And The Holograms”; and writer/director Richard Linklater’s “Everybody Wants Some!!,” the spiritual sequel to his feature, “Dazed And Confused.” Guzman’s television credits include the event series “Heroes Reborn” and dramas “Notorious” and “Pretty Little Liars.”