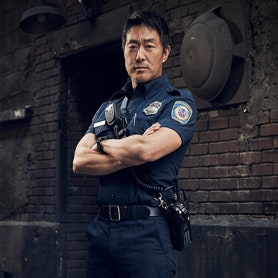 Kenneth Choi’s role on 9-1-1 reunites him with Ryan Murphy. The two worked together on “The People v. O.J. Simpson: American Crime Story,” in which Choi portrayed Judge Lance Ito. His additional television credits include THE LAST MAN ON EARTH and “Sons of Anarchy.”

On film, he most recently appeared in the blockbuster “Spiderman: Homecoming.” He next will appear in the feature films “Bright,” from director David Ayer; “Stephanie,” with Frank Grillo; Nash Edgerton’s “Gringo”; and “Hotel Artemis,” alongside Jodie Foster and Sterling K. Brown; as well as the cable series “Counterpart,” with J.K. Simmons. Choi’s other credits include “The Wolf of Wall Street,” “Suicide Squad” and “Captain America: The First Avenger.” Choi resides in Los Angeles.