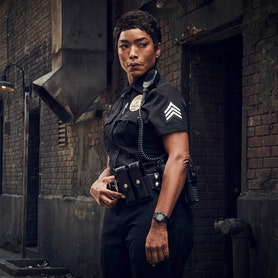 Angela Bassett’s talent and abilities as an actress, director and executive producer in both television and film have garnered well-deserved respect and acclaim from peers and fans, proving her to be one of the industry’s premier leading ladies.

In 2017, Bassett received her fourth career Emmy Award nomination for her guest performance on “Master of None.” She previously competed in the category of Outstanding Lead Actress in a Miniseries or a Movie for “The Rosa Parks Story” in 2002. In 2016, Bassett was nominated for her first Directors Guild of America Award for her directorial debut on the cable film “Whitney.” Also in 2016, Bassett reprised her role as “Lynne Jacobs” in “London Has Fallen,” the sequel to “Olympus Has Fallen,” alongside Gerard Butler, Aaron Eckhart and Morgan Freeman. She also appeared in Spike Lee’s film, “Chiraq”; and writer/director Stephen Poliakoff’s miniseries, “Close to the Enemy,” alongside Jim Sturgess, Freddie Highmore, Charlotte Riley and Alfred Molina.

Always expanding the many facets of her talents, Bassett ventured into a new entertainment medium, as the lead character in Tom Clancy's “Rainbow Six Siege,” the highly acclaimed first-person shooter video game franchise. She also continues to lend her voice to the animated series “Bojack Horseman,” alongside Will Arnett and Amy Sedaris.

Recently, Bassett was seen in director James McTeigue’s “Survivor,” opposite Pierce Brosnan, Emma Thompson and Milla Jovovich; and in Gregg Araki’s “Whitebird in a Blizzard,” opposite Shailene Woodley. She returned to the musical genre in the film “Black Nativity,” opposite Forest Whitaker, for director Kasi Lemmons, and received a Screen Actors Guild Award nomination for her work as “Coretta Scott King” in the cable movie “Betty and Coretta.”

Bassett made her feature debut as an actor in John Singleton’s “Boyz N the Hood.” Other memorable roles include Terry McMillan’s “Waiting to Exhale,” co-starring Whitney Houston; Kathryn Bigelow’s futuristic “Strange Days,” with Ralph Fiennes; “Vampire in Brookyln,” opposite Eddie Murphy; and “Supernova,” with James Spader.

Perhaps best known for her intense portrayal of Tina Turner in the biopic “What’s Love Got To Do With It,” opposite Laurence Fishburne, Bassett earned the Golden Globe Award for Best Performance by an Actress in a Motion Picture - Comedy or Musical, an NAACP Image Award for Outstanding Lead Actress in a Motion Picture and an Academy Award nomination. She currently resides in Los Angeles.