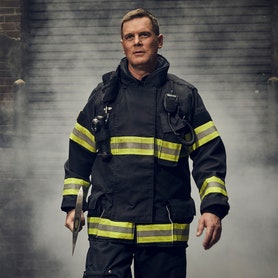 A native of Minneapolis, MN, Peter Krause is an Emmy Award- and Golden Globe-nominated actor who most recently starred in the drama series “The Catch,” opposite Mireille Enos.

Krause is best known for his work on the acclaimed cable drama “Six Feet Under,” for which he was nominated for three Emmy Awards, two Golden Globe Awards and two Screen Actors Guild (SAG) Awards. He also received two SAG Awards as part of the “Six Feet Under” ensemble. Krause made his television debut as a regular on Carol Burnett’s hit variety show, “Carol and Company,” followed by a recurring role on the popular series “Cybill.”

His additional TV credits include “Parenthood,” alongside Lauren Graham; “Dirty Sexy Money”; “Sports Night”; and the cable miniseries “The Lost Room.” His film credits include “Beastly,” the independent feature “Civic Duty” and “We Don’t Live Here Anymore,” in which he starred opposite Naomi Watts and Mark Ruffalo. Additionally, in 2004, Krause made his Broadway debut starring in Arthur Miller’s “After The Fall,” for director Michael Mayer. Krause currently resides in Los Angeles.