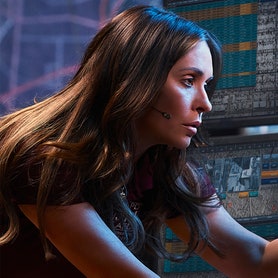 In addition to FOX’s 9-1-1, Jennifer Love Hewitt starred as “Sarah Reeves” on the network’s hit drama, “Party of Five,” and its spin-off, “Time of Your Life.”

Hewitt starred in and executive-produced the hit cable film “The Client List,” for which she received a Golden Globe nomination for Best Performance by an Actress in a Mini-Series or Motion Picture Made for Television. The success of the film led to a weekly series of the same name, in which Hewitt starred and served both as an executive producer and episodic director for two seasons.

She also starred in, executive-produced and directed several episodes of the hit network series “Ghost Whisperer,” which ran for five seasons. Her additional television credits include a starring role in the hit drama “Criminal Minds,” which she joined for the series’ 10th season; the Hallmark Hall of Fame telefilm “The Lost Valentine,” opposite Betty White; and a recurring role on the comedy series “Hot In Cleveland.”

On the big screen, Hewitt is known for her role as “Julie James” in the “I Know What You Did Last Summer” franchise. She also starred opposite Sigourney Weaver in the romantic comedy “Heartbreakers,” and alongside Jackie Chan in the action comedy “The Tuxedo.” Her additional feature credits include “If Only,” “Can’t Hardly Wait,” “The Hunchback of Notre Dame II,” “Sister Act 2,” “Garfield” and its sequel, “Garfield: A Tail of Two Kitties.”

In addition to her acting, producing and directing credits, Hewitt is a singer and songwriter. Her most recent studio album, “BareNaked,” became her first album to chart in the United States, on the Billboard 200 chart.

Hewitt’s debut novel, “The Day I Shot Cupid,” was released in 2010, with the book becoming a New York Times Bestseller the week of its release. She is married to actor Brian Hallisay and together they have two children, daughter Autumn and son Atticus.