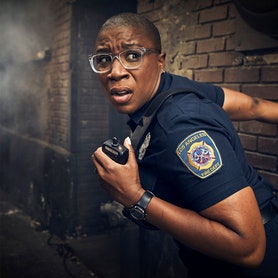 Aisha Hinds recently was featured in the FOX event series “Shots Fired” and the cable film “All The Way,” opposite Bryan Cranston and Anthony Mackie. She also received critical acclaim for her portrayal of Harriet Tubman in the drama series “Underground.”

Hinds began her career in schools, churches, prisons, group homes and on the streets of New York City as a cast member with a local Brooklyn-based group of young artists called the Health Watch Players. She went on to obtain a B.F.A. in theater at the University of Miami and graduated with honors. Hinds’ break came when she was cast on “NYPD Blue.”

Her additional television credits include a series regular role on the drama “Under the Dome,” as well as recurring roles on “Hawthorne,” “Weeds,” “Dollhouse” and “True Blood.” Hinds resides in Los Angeles.