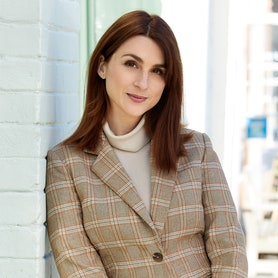 Aya Cash most recently starred as “Stormfront,” the newest member of the superhero group, “The Seven,” in the second season of the Emmy Award-nominated streaming series “The Boys.”  She is currently in production opposite Elle Fanning in the streaming limited series “The Girl From Plainville” and will appear alongside Michelle Pfeiffer in the premium cable limited series “The First Lady.”

On the film side, Cash most recently was seen starring opposite William Jackson Harper in the indie comedy “We Broke Up” and in Josh Ruben’s “Scare Me,” which made its world premiere at the 2020 Sundance Film Festival. Her additional film credits include the indie dark romantic comedy “Social Animals,” with Noel Wells and Josh Radnor; the streaming action-comedy, “Game Over, Man!,” starring “Workaholics” co-creators Adam Devine, Anders Holm and Blake Anderson and produced by Seth Rogen; the dark comedy “Mary Goes Round” (2017 Toronto International Film Festival), for which she earned the Excellence in Acting Award from the 2018 Vail Film Festival; and “Big Brother Volcano” (2017 Los Angeles Film Festival), directed by Paul Briganti. She also appeared in Martin Scorsese’s Academy Award-nominated film “The Wolf Of Wall Street,” starring Leonardo DiCaprio, as well as Mike Birbiglia's “Sleepwalk With Me,” “The Oranges” and “Loitering With Intent,” among others.

Cash’s theater credits include starring roles in Off-Broadway plays at playhouses such as Playwrights Horizons, The Atlantic, MCC, Manhattan Theatre Club and the Rattlestick. She has starred in New York or world premieres of plays by Ethan Coen, Bruce Norris, Zoe Kazan, Matthew Lopez, Lucy Thurber, Liz Flahive and Nicky Silver. She most recently starred opposite Gillian Jacobs in the world premiere of “Kings,” a play by Sarah Burgess, opening at the Public Theater.