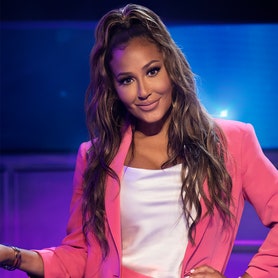 Adrienne Bailon-Houghton is a Daytime Emmy Award-winning television host, acclaimed pop-vocalist, lifestyle personality, producer and founder of the faith-based jewelry brand XIXI and luxury vegan handbag label La Voûte. Houghton co-hosts “The Real,” a daily talk show on FOX Television stations, which premiered in 2013 and made Houghton the first Latina daytime talk show host on English-language television. Along with her co-hosts, Houghton won a 2018 Daytime Emmy Award for Outstanding Entertainment Talk Show Host and a 2018 NAACP Image Award for Outstanding Talk Series. Houghton launched her YouTube channel, “All Things Adrienne,” in 2018, serving as executive producer. Since its launch, the channel has grown to 989k subscribers and has generated more than 62 million total views. Extending her digital footprint into the fashion space, Houghton debuted the streaming series “Wear It Well” in 2019, aiming to provide women of all shapes and sizes tips for dressing confidently. Born in New York City’s Lower East Side, Houghton was a household name by the time she was just 14 years old. She first stepped into the spotlight in 1999, when she rose to fame as the lead singer of multi-platinum R&B girl group 3LW. The group released a total of three studio albums and toured globally with Destiny’s Child and NSYNC. In 2003, Houghton became a founding member of the pop group The Cheetah Girls and was featured in the movie of the same name. Two sequel films also were released, “The Cheetah Girls 2” and “The Cheetah Girls: One World.” As an actress, Houghton’s credits include roles in several television hits, including the series “That’s So Raven” and “Buffalo Dreams” and the television movies “All You’ve Got” and “Lovestruck.” She also appeared in the feature film “Coach Carter” and the independent motion picture “I’m in Love with a Church Girl,” among others. In 2019, Houghton was a contestant on Season Two of FOX’s THE MASKED SINGER, coming in third place as “The Flamingo.” In addition to hosting the red carpet at the 2013 BET Awards, she was frequently featured as a co-host on the popular countdown show “106 and Park,” as well as on “Morning Buzz.” In 2012, Houghton debuted her docu-reality show, “Empire Girls,” with model and television personality Julissa Bermudez. She also hosted the series “Nail’d It!,” a reality show that focuses on nail-art competition, and launched her own “Fingertip Fetish” nail polish line.