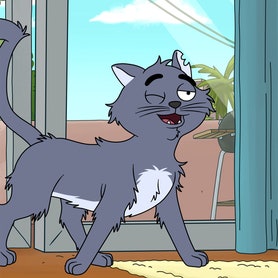 Jason Mantzoukas next can be seen in Antoine Fuqua’s “Infinite,” opposite Mark Wahlberg and Chiwetel Ejiofor. Mantzoukas most recently was seen as “Tick Tock Man” in “John Wick 3.” In 2018, he starred in “The Long Dumb Road,” an American road trip comedy that premiered at the Sundance Film Festival, directed by Hannah Fidell, starring Tony Revolori, Casey Wilson and Ron Livingston. On the feature side, Mantzoukas also can be seen as “Frank” in “The House”; “Nadal” in “The Dictator”; and in “How To Be Single,” “Sleeping With Other People” and “Neighbors.” On television, Mantzoukas is best known for roles like “Jay” on “Big Mouth”; “Rafi” on “The League”; “Adrian Pimento” on “Brooklyn Nine-Nine”; and “Derek” on “The Good Place.” Other series on which he has appeared include “I’m Sorry,” “No Activity,” “Kroll Show,” “Modern Family,” “Transparent,” “Broad City,” “Parks and Recreation,” “Enlightened” and “Community.” On the animated side, he most recently can be seen as “Rex Splode” on “Invincible.” In addition to his acting work, Mantzoukas co-wrote “Mr. Neighbor's House” (1 & 2), as well as the comedy “Ride Along,” starring Ice Cube and Kevin Hart. Mantzoukas co-hosts the wildly popular comedy podcast “How Did This Get Made?”