Back to Crime Scene Kitchen 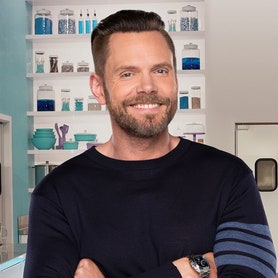 Joel McHale is an actor, comedian and television host. He currently can be seen as host of “Card Sharks,” and he also co-hosts the podcast “The Darkest Timeline,” alongside his fellow “Community” co-star, Ken Jeong.

Perhaps best known for his starring role on the hit comedy series “Community,” McHale most recently was seen in “Happily,” alongside Kerry Bishe. McHale’s other recent projects include the thriller “Becky,” alongside Kevin James and Lulu Wilson; “Stargirl,” in which he portrays “Starman/Sylvester Pemberton”; “Twilight Zone”; and voicing “Johnny Cage” in “Mortal Kombats Legends: Scorpion’s Revenge.” McHale’s past projects include “The Happytime Murders,” as well as “A Futile & Stupid Gesture,” opposite Will Forte, in which he played Chevy Chase, his former “Community” co-star. McHale hosted “The Joel McHale Show With Joel McHale on Netflix,” a half-hour topical series that took a sharp, absurdist look at pop culture and news from across the globe. In 2015, he wrapped the 12th and final season of “The Soup,” in which he satirized pop culture and current events. McHale previously starred in “The Great Indoors”; “Santa Clarita Diet,” with Drew Barrymore and Timothy Olyphant; and FOX’s revival of “The X-Files,” in which he played a conservative news anchor. Other starring feature roles include “A Merry Friggin' Christmas,” opposite Robin Williams; the Jerry Bruckheimer-produced supernatural thriller “Deliver Us From Evil”; the romantic comedy “Blended,” alongside Adam Sandler and Drew Barrymore; Seth MacFarlane's comedy smash, “Ted”; David Frankel’s “The Big Year”; and Steven Soderbergh’s “The Informant”; as well as “What’s Your Number?,” starring Chris Evans and Anna Faris.