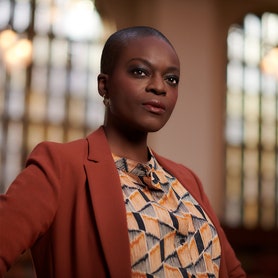 Adeola Role is a New York-based actor. Her television and film credits include “The Good Fight,” “Blue Bloods,” “The Last O.G.,” “The Blacklist,” and “Pose.” Her Broadway theater credits include “Harry Potter and the Cursed Child” and “Eclipsed,” and her off-Broadway credits include “On Sugarland, “Office Hour” and “Invisible Thread.” She received her training from UC Berkeley and M.F.A from MXAT/ART at Harvard University.