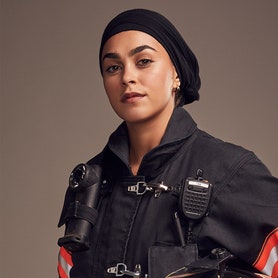 British actress Natacha Karam most recently appeared in the feature film “The Hurricane Heist,” and had a starring role in the drama series “The Brave.” Karam is best known for her pivotal role on the Emmy Award-winning cable series “Homeland.” She will be seen next in the feature film “The Old Guard,” opposite Charlize Theron and Chiwetel Ejiofor and directed by Gina Prince-Bythewood.