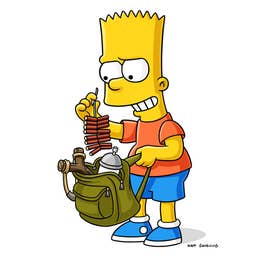 Emmy Award-winning actress Nancy Cartwright is best known as the voice of “Bart Simpson,”  but she also voices “Ralph Wiggum,” “Nelson Muntz,” “Todd Flanders” and various other residents of Springfield. She was nominated for an Emmy Award for Outstanding Character Voice-Over Performance in 2020 and 2017.

In addition to her work on THE SIMPSONS, Cartwright voiced “Rufus the Naked Mole Rat” in the animated series “Kim Possible,” and “Todd Daring” in “The Replacements.” With more than two decades of voice-over experience, Cartwright has voiced various other animated series, including “Rugrats,” “Richie Rich,” “Animaniacs,” “Pinky and the Brain,” “The Critic,” “God, the Devil and Bob,” “Mike, Lu & Og” and Chuck Jones’ “Timberwolf.” Cartwright has had numerous roles in films and television series, including “Fame,” “Empty Nest,” “Cheers,” “The Fresh Prince of Bel-Air,” “Twilight Zone: The Movie,” “Godzilla,” “Marian Rose White” and “The Simpsons Movie.”

Cartwright received an Emmy Award for Outstanding Voice-Over Performance and an Annie Award for Voice Acting in the Field of Animation as “Bart Simpson,” as well as Emmy Awards for “Animaniacs” and “Pinky, Elmyra & the Brain” and a Drama-Logue Award for her one-woman play, “In Search of Fellini.” Cartwright and her company, SportsBlast, were recognized by the Houston Film Festival with a Silver Award for the debut of her internet series, “The Kellys.” She received an Aurora Gold Award for her autobiographical documentary, “A Day in the Life,” and a Digital Video Award for Best Documentary on her most recent production, “Nancy Cartwright, The Voice of Success.”

She actively supports many nonprofit organizations that help children, including Famous Fone Friends, Make-A-Wish Foundation, The Way to Happiness Foundation, World Literacy Crusade, PALS, Boys & Girls clubs and her own non-profit group, Happy House. She is a member of Women in Film, ASIFA (The International Animated Film Society), Women in Animation and The Chouinard Foundation.

Her best-selling autobiography, “My Life as a Ten-Year-Old Boy,” which is based on her work on THE SIMPSONS, has been released as an audio book and adapted into a one-woman show that debuted at the Edinburgh Fringe Festival in 2004.