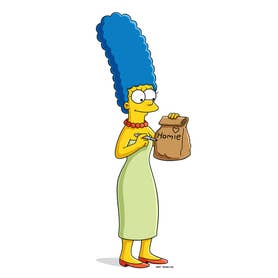 Emmy Award winner Julie Kavner is the voice of “Marge Simpson”  and her sisters, “Patty” and “Selma,” on THE SIMPSONS.

Two years out of college, Kavner began her professional career playing the sardonic “Brenda Morgenstern” on the TV series “Rhoda.” With her wry, sarcastic delivery and her raspy, unique voice, Kavner has carved a niche as a likeable sidekick. She has made a career out of playing scrappy underdogs, working women and supportive wives in such films as “Bad Medicine,” “Surrender” and “Awakenings”; and in the TV movies “No Other Love,” “Revenge of the Stepford Wives” and Neil Simon’s “Jake’s Women.”

A Woody Allen regular, Kavner has appeared in seven of his films, including “Hannah and Her Sisters” and “Alice.” She is the only actress to have played Allen’s mother (“Radio Days”), his girlfriend (“New York Stories”), his fiancée (“Shadows and Fog”) and his wife (“Don’t Drink the Water”). Her other film credits include “Forget Paris,” “Dr. Doolittle,” “The Lion King 1½” and “Click.” In 2007, Kavner starred in the feature film “The Simpsons Movie.”

Kavner displayed her gifts for mimicry on “The Tracey Ullman Show” and “Tracey Takes On…” with diverse characters, before she was cast in her first starring role in Nora Ephron’s “This Is My Life.” Kavner also appeared in another prominent role opposite Albert Brooks in “I’ll Do Anything.”

Kavner’s New York theater credits include “God’s Heart” at Lincoln Center, “The Mineola Twins,” “Mizlansky/Zilinsky or Schmucks,” “Particular Friendships” and “The Vagina Monologues,” in New York and Los Angeles. In 2011, she starred in the Broadway play “Relatively Speaking.”