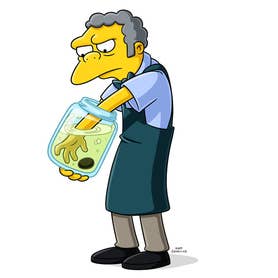 He appeared on the cable drama “Ray Donovan,” opposite Liev Schreiber. He also created and starred in the cable series “Brockmire.”

Azaria was nominated for a Screen Actors Guild Award for his memorable role as “Agador Spartacus” in Mike Nichols’ “The Birdcage.” He garnered critical praise for his portrayal of television producer “Al Freedman” in the Academy Award-nominated “Quiz Show.” His other film credits include “Norman,” “Lovelace,” “The Smurfs,” “The Smurfs 2,“ “Love and Other Drugs,“ “Year One,“ “Night at the Museum 2: Battle of the Smithsonian,” “Run, Fatboy, Run,” “Dodgeball: A True Underdog Story,” “Along Came Polly,” “Shattered Glass,” “America’s Sweethearts,” “Cradle Will Rock,” “Mystery, Alaska,” “Mystery Men,” “Godzilla,” “Homegrown,” “Great Expectations,” “Grosse Pointe Blank,” “Pretty Woman” and Woody Allen’s “Celebrity.”

He starred in the cable series “Huff” and in the World War II miniseries “Uprising.” He earned an Emmy Award nomination for Outstanding Supporting Actor and a Screen Actors Guild Award nomination for his work in “Tuesdays with Morrie.” He also appeared as “Professor Groteschele” in the live television broadcast “Fail Safe,” and was a featured guest star on “Friends.”

Azaria trained at the American Academy of Dramatic Arts in New York and played “Hamlet” in a production of “Rosencrantz and Guildenstern Are Dead” at Columbia University. He continued his theater studies at Tufts University, appearing in such plays as “Uncle Vanya,” “The Merchant of Venice” and “The Ballad of the Sad Café.” He starred in Mike Nichols’ hit Broadway play, “Spamalot” and “The Farnsworth Invention.”

In addition to THE SIMPSONS, Azaria brought many of the show’s beloved characters to the big screen in 2007’s “The Simpsons Movie.” His additional voice-over work includes the feature films “Hop” and “Happy Feet 2.”