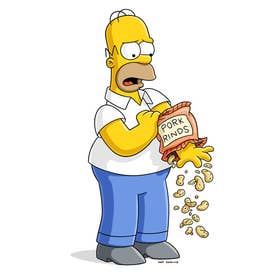 Emmy Award winner Dan Castellaneta is the voice of “Homer Simpson,” “Krusty the Clown,” “Grampa Simpson,” “Barney Gumble,” “Mayor Quimby,” “Groundskeeper Willie” and a multitude of others on the historic animated series THE SIMPSONS.

A former cast member of “The Tracey Ullman Show” and “Sibs,” Castellaneta has also made numerous guest appearances on television shows, including “Hot In Cleveland,” “Major Crimes,” “Parks and Recreation,” “Entourage,” “Everybody Loves Raymond,” “Friends,” “NYPD Blue,” “Stargate SG-1,” “Greek,” “Bones,” “The Office,” “The Mindy Project,” “Desperate Housewives” and “Murphy Brown.” His feature film work includes “Super 8,” “The Client,” “Forget Paris,” “Love Affair,” “The War of the Roses,” “My Giant,” “Nothing in Common,” Neil Simon’s “Laughter on the 23rd Floor,” “Behind the Camera: The Unauthorized Story of ‘Charlie’s Angels,’” “The Pursuit of Happyness” and “I Want Someone to Eat Cheese With.” In 2007, he starred in the worldwide smash hit “The Simpsons Movie.”

A native of Chicago, Castellaneta performed with famed improvisational comedy troupe The Second City. In Los Angeles, he won a Drama-Logue Award for his performance in “Tom & Jerry” as part of the Act One Series. He created the stage role of “Harvey Pekar” in the long-running hit “American Splendor” at Theater/Theater in Hollywood. He also performed and co-wrote the acclaimed comedy show “Deb & Dan’s Show,” in which he starred with his wife, Deb Lacusta, at The Improvisation. He made his New York debut in the title role of “The Alchemist” and also performed his one-man show, “Where Did Vincent van Gogh?,” in Los Angeles, New York and Chicago, as well as at The Edinburgh Film Festival and the Aspen HBO Comedy Festival. His other theater credits include “The Underpants,” at the Geffen Playhouse in Los Angeles; “Moonlight and Magnolias,” at The Old Globe in San Diego; and the premiere of “Nighthawks,” at the Kirk Douglas Theater in Los Angeles. In December of 2012, he appeared in “Twist Your Dickens,” a co-production of The Second City and The Center Theatre Group, which also premiered at the Kirk Douglas Theater.

Castellaneta’s writing credits include “The Tracey Ullman Show,” “The Simpsons Comic Books” and eight episodes of THE SIMPSONS, one of which was nominated for a Writers Guild Award. His play, “A Purple Dawn,” premiered at Geneva College in northwestern Pennsylvania. Along with his wife, he founded the improv scenario group Instant Theatre in Chicago, where they wrote, directed and performed comedic one-act plays.