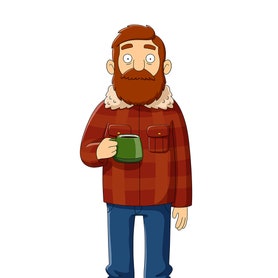 Nick Offerman voices the character Beef Tobin in The Great North on FOX.

Nick Offerman is an actor, writer and woodworker, best known as the character of “Ron Swanson” in the hit comedy series “Parks & Recreation”; “Forest” in “Devs”; and “Karl Weathers” in the acclaimed series “Fargo.” Recent film credits include “Hearts Beat Loud,” “The Founder,” “Bad Times at the El Royale,” “Lucy in the Sky,” “The Hero,” “The LEGO Movie,” “The LEGO Movie 2: The Second Part,” “White Fang” and “The Little Hours.”

In his spare time, he can be found at his woodshop in Los Angeles, building hand-crafted items, ranging from fine furniture to canoes to ukuleles.