Back to Hell's Kitchen 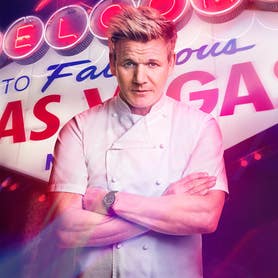 Ramsay has since opened a string of successful restaurants in cities across the globe, including Doha, Qatar; Las Vegas, NV; Atlantic City, NJ; Singapore; Dubai; and several restaurants throughout the U.K.

Renowned for highly successful and award-winning original programming, Emmy Award-nominated Ramsay produces TV shows on both sides of the Atlantic seen by audiences worldwide in more than 200 territories, and is the only talent on air in the U.S. with four primetime national network shows. He hosts and executive-produces HELL’S KITCHEN, MASTERCHEF, MASTERCHEF JUNIOR and GORDON RAMSAY’S 24 HOURS TO HELL AND BACK, in addition to yearly specials, including GORDON RAMSAY’S AMERICAN ROAD TRIP.

His multi-media production company, Studio Ramsay, is behind several hit shows in both the U.S. and U.K., with a growing slate of new shows and development. Launched in 2016, Studio Ramsay was created to develop unscripted, digital and scripted programming, focusing on new formats and innovative programming, as well as fostering new talent. Studio Ramsay is behind the highly successful FOX series GORDON RAMSAY’S 24 HOURS TO HELL AND BACK, which was the highest-rated food show of 2019, and the successful two-hour “Save our Town” special in 2020. It’s also behind the cable series “Gordon Ramsay: Uncharted,” which airs in 172 countries and 43 languages worldwide, accompanied by a first-of-its-kind stand-alone “Gordon Ramsay: Uncharted” digital and print magazine. Studio Ramsay is behind the new BBC1 format “Gordon Ramsay’s Bank Balance.” It also produces the BAFTA-nominated “Gordon, Gino and Fred’s Road Trip” for ITV, which recently aired a Christmas Special and is in production on Season Three. The second season of “Road Trip” was adapted for the U.S. in 2021 for a FOX special as the successful GORDON RAMSAY’S AMERICAN ROAD TRIP. The Studio is also behind the ITV series

“The Savoy,” a fixed rig of the prestigious London hotel. Studio Ramsay also has programs in various stages of production and development for the BBC and other top U.K. Broadcasters, as well as key U.S. cable outlets.

Studio Ramsay’s Digital Division is behind all of Ramsay’s original content on his highly successful YouTube Channel, which has made Ramsay the most-subscribed chef on the platform. The channel launched the trending interview series “Scrambled” and is behind the highly successful “Ramsay in 10,” which went live during the global Covid pandemic and will return in 2021. Studio Ramsay Digital oversees and creates content for all behind-the-scenes moments from Studio Ramsay linear programming and also has produced content for National Geographic and MasterClass. It also produces recipe content across Ramsay’s 75 million-plus social media reach, including his breakout TikTok account.

Studio Ramsay was behind the daytime cooking series “Culinary Genius,” which premiered on ITV in the U.K. and was syndicated on FOX stations in the U.S.; the ITV series “Gordon on Cocaine”; and FOX’s “The F-Word Live With Gordon Ramsay.” The highly popular children’s series “Matilda and the Ramsay Bunch,” starring Tilly Ramsay, for U.K. children’s channel, CBBC, also is produced by Studio Ramsay.

For his work on MASTERCHEF JUNIOR, Ramsay received a 2017 Emmy Award nomination for Outstanding Host for a Reality or Reality/Competition Program.

In 2014, Ramsay and his wife, Tana, set up the Gordon and Tana Ramsay Foundation to make a meaningful difference to charities that are important to them. The Foundation is currently partnered with Great Ormond Street Hospital, one of London’s most respected Children’s Hospitals.

Ramsay received an OBE (Order of the British Empire awarded by Queen Elizabeth II) in 2006 for services to the industry.