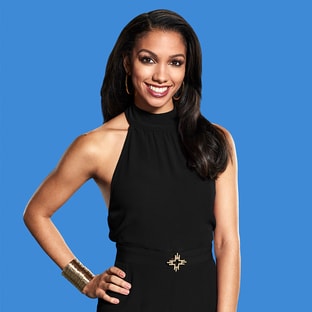 Actor, producer, activist and CEO Corinne Foxx is following in the footsteps of her award-winning father, Jamie Foxx. The California native is currently the executive producer of the new streaming comedy series “Dad Stop Embarrassing Me!,” inspired by her father-daughter relationship.

Most recently, Foxx starred in the film “Safety,” directed by Reginald Hudlin, which was released in December 2020. She also starred in “47 Meters Down: Uncaged.” On TV, she starred in the Emmy Award-winning “Live In Front Of A Studio Audience: Good Times.”

In August 2020, and alongside her best friend, she launched the podcast, “Am I Doing This Right?” With listeners in more than 51 countries, the podcast acts as a guidebook for young people on how to kickstart their adulthood.

Foxx is an advocate for causes and organizations that are close to her heart. In November 2018, the Women Economic Forum honored Foxx with the Young Leaders Creating A Better World For All Award, for her philanthropic efforts in promoting mental health awareness.

In 2017, Foxx became an ambassador for NAMI, National Alliance on Mental Illness, to promote legislative and cultural changes towards mental health in the United States. In addition to working with NAMI, she also works alongside Girl Up!, a United Nations foundation that works to cultivate young girls as leaders and advocates. Additionally, she recently was named an ambassador for the Endometriosis Foundation of America.

In July of 2017, she launched her own lifestyle website and online marketplace, Foxxtales, featuring interviews with influential women, personal essays and a shop featuring and promoting female-founded businesses.

In 2016, Foxx was honored as Miss Golden Globe by the Hollywood Foreign Press Association.

At the age of 19, Foxx was signed by modeling agency, LA Models. Since then, she has gained representation in New York and London. She has been shot in campaigns for Dolce & Gabbana, Kenneth Cole, Wet N Wild cosmetics and Nasty Gal. She has walked the runway for Kanye West’s Yeezy collection, D&G and Sherri Hill. Foxx also had features in Vogue, NYLON, ASOS Magazine and W Magazine.

Foxx has dedicated time to her acting studies at the American Academy for Dramatic Arts and Anthony Meindl Acting Workshop.

Before entering the entertainment industry, Foxx prioritized her higher education. She attended the University of Southern California in 2012. Foxx graduated from USC in 2016, obtaining a Bachelor of Arts in public relations.