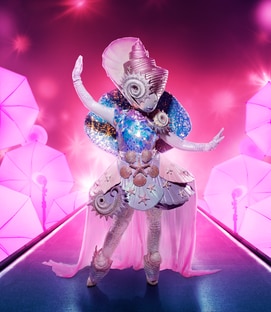 Seashell stuns in head-to-toe, pink-and-purple pastel. Seashell shimmers and sparkles in a short dress made of starfish and shells.

When I was young, I was pulled by the tide all around the globe with my family. Always adrift, I never felt grounded—so I found my peace by the shore. When my career took off, it was like a massive tsunami of success. But much like my childhood, I still drifted, wearing many hats. I often wonder if I've found my true calling. That's part of why I'm here. I'm nervous. I haven't sung a really long time, but I want to face my fears. And tonight, I hope you pick this shell for keeps.

It’s been ages since I have been on stage. So stepping out in front of all of you for the first time, I was a bundle of nerves! But I am so proud of myself for my solo performance. In the past, being alone was scary for me. I always felt like a tiny little shell in a big, big world! But then one day, everything changed. Out of nowhere, a certain Shellman asked me out. He was a total jock, but he made me feel larger than life and gave me the courage to do things I was always scared of. No matter how small I feel on that big stage, I am more confident taking a dive knowing he is there to catch me.