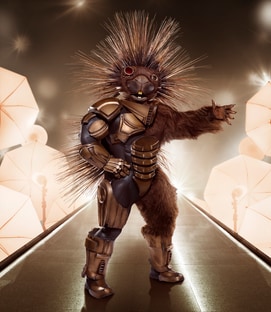 Porcupine, or Robopine, is one part prickly, one part cuddly, and one part robot. Robopine is very tall with bronze armor. Just be careful around those sharp quills.

Who Is Porcupine aka Robopine?

Scanning. Scanning. Oh—hello there. I may look prickly, but don't be scared. Where I came from, I was forced to grow thick quills. I was left to fend for myself, with nothing but a dream. So, I went on a mission to get onto Hollywood's radar. I used 411 day and night just to make a connection, until a certain angel said hello. That random call changed everything. Now I'm on my next mission, and when I have my sights set on something, nobody can touch me.

My first performance made every quill on my back stand up. I have been in a funk lately, but putting on this prickly, shiny armor and singing my heart out was exactly what I needed. I felt like a singing superhero! Sixty years ago, as a tiny piney in Costa Rica, my superheroes were the workers whose job it was to keep my streets clean. They had my dream job, but my life took me on a different route. To this day, when I see them working, I like to pull over and lend a claw. They always say, “Why would a shiny porcupine like you want get your quills dirty with us?” I tell them they are the true superheroes who inspired the work ethic I have carried my whole life, which has gotten me on big stages just like this.