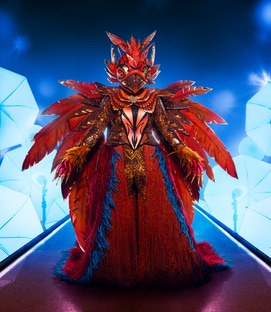 Phoenix is a dazzling bird with large red-feathered wings and accents of gold and blue fringe.

OK, here's the tea. When people see me, they always see a winner, baby. But while I've graced the cover of many magazines, I've actually hidden behind a mask for most of my life—even from those that I love the most, like my superhero dad. He taught me how to shoot for the stars. So, I did. And eventually, millions saw me as a superhero. But the more I focused on pleasing others, the farther I got from who I really was. My dad was proud of what I did, but I often wonder if he'd be proud of who I am. I'll never know. I missed many chances to tell him my truth. And it's my biggest regret. But it taught me there's no time to waste. So tonight, I'm stepping back into the winner's circle because this old bird still knows how to turn heads.