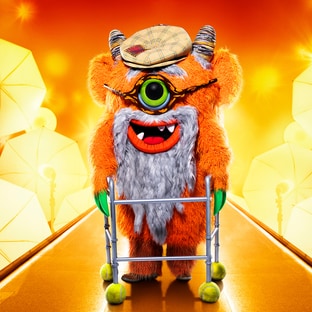 Grandpa Monster is fuzzy and orange with a grey moustache and beard. Grandpa Monster has two horns, one big green eye, green claws, and wears unifocal glasses and a tan plaid newsboy cap, sometimes walking with a silver walker.

Who Is Grandpa Monster?

Hey, young whippersnappers! Reflecting on my long life, I can't believe the troublemaking fool I was as a youngster—Hi-yah!—always acting out to get all eyes on me. Until a teacher pulled me aside after class and made me see I was smarter than the character I was playing. I decided then to put the "I" in Einstein and became a star pupil. Uh! I'm still working on shaking my bad reputation. So, when this old monster takes his mask off, I hope you're not afraid of who I was a long time ago. [ROARS]

I've always hated the sound of my singing voice, but being Grandpa Monster, it's given me a new kind of confidence. I haven't felt this free since the time I stranded myself in the wilds, cast away, just to see if I could survive. It definitely was a challenge, but I made it out by the skin of my three teeth. And now I'm here to take on another challenge—securing that Golden Mask. I know I'm up against some stiff competition, but I've traveled the world and sold out arenas. Not even that pesky Piglet could stand in my way. Because when I talk the talk, I walk the walk, baby.

Grandpa Monster was revealed on 03/31/2021, season 5 episode 4. See the big reveal and watch a special unmasked performance. Check out Phoenix’s first interview without the mask here!