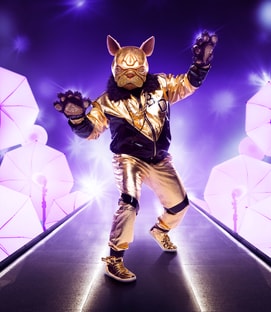 Bulldog is a golden-faced French bulldog with a gold and black tracksuit, black furry paws, and stylish gold sneakers.

My whole life, I had to fend for myself, stepping up to any challenge that comes my way. I made moves on every green field with Panthers and Pit Bulls, running fast like a human torch. Yep, I'm one hot dog-- technically, the sexiest dog alive, people. But don't be fooled by all of the beef. I'm a big softy inside. I'm sit, stay, give you my ball, whatever it takes to make you love me. So beware of dog kisses. Now this pup's about to blow the last two wildcards out of the water and become the most popular pet on stage. And I'm dedicating my performance to someone very special.

Meaningful Object Clue: “AND… LIVE FROM NEW YORK, IT’S SATURDAY NIGHT” written on a white board

Bulldog was revealed on 04/07/2021, season 5 episode 5.Nick Cannon was revealed to be Bulldog, and he will return as the host, replacing Niecy Nash for the remainder of season 5 of THE MASKED SINGER. See Bulldog’s first interview without the mask here and check out a special unmasked performance!