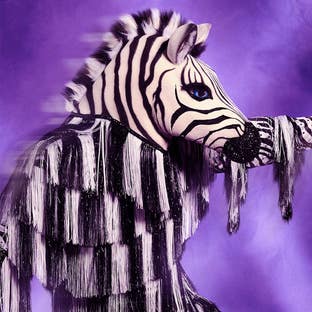 The Zebra is in the building. It is covered in a black and white, striped suit—perfect for a strut across the dance floor.

Who Is The Zebra?

You haven't seen me in a while. To be honest, I've kind of fallen out of the limelight. But I know a thing or two about running on a low gas tank. I grew up in a rough neighborhood, where there was only one kind of love, tough love. New kids moving onto my block only meant more street fights. Those teenage years left me aching in my heart. There was only one direction to go, up. It was time to earn my stripes and become larger than life. Fast forward all these years, and now, the president knows my name. I'll tell you, sometimes my life truly feels upside inside out. But being on this show right now is so important to me. It's a big part of my second act and shifting back into a higher gear. And once I get going again, I'll never stop.

Visual clues: A medal, the number 11, a red car with "os" written on it, hot dog costume

Oh man, it was amazing to be up on that big stage again. It really gave me that little taste of adrenaline I've been missing ever since my golden promotion to ZEO. Our mission at Zebra, Inc. is to help others, especially those who may not be able to help themselves. Childhood was hard, surrounded by poverty and crime. But also, I always had love, and I never would have made it to where I am today without the support of some great mentors and friends. And that's why I need to give back and be a hero to all the little zebras out there who need someone to believe in them. Sometimes life is crazy, but love will always help you fight through. The first dance was a fun salsa, but tonight I'm slowing it down with a sexy duet. You wouldn't believe how hard it is to bring the sexy as a zebra. But just life, if I can channel the love, I'll come out on top.

Look, I had two left feet even before I became the Zebra. But look where I am now-- the Super Six! At first, wearing a mask freaked me out. Honestly, I'm very claustrophobic. But getting to perform again has felt like regaining a piece of my soul. I may not be the best dancer, but I love it! So I'm going to keep the fun Latin vibes going, and hopefully that keeps me going in this competition. And if you haven't guessed who I am by now, here's a clue.

Visual clues: Graham cracker with an 'E' on it,

Zebra's more fun than you could imagine. Considering he's a champion in this field, I'm not surprised he's such a good student. Not only is he super sensitive and caring–which I would never have guessed–but Zebra is also incredibly strong. His muscles are like cinder blocks. He literally has zero fat on his body. The road started out a bit rocky. But he's a fighter. Plus, he has two entire countries cheering us on and dancing with us. He may not be the best dancer in the top 5, but he has the most heart. And tonight, we're going to bring the party again.

I am genuinely surprised I'm still here. The other dancers are so talented. But when it comes to heart, no one can beat me. Despite what people might think, I have a huge heart underneath this tough zebra exterior. Many years ago, I lost someone very special to me. Growing up, she was the center of my world. I was devastated. I still am. Now I do everything I can to raise awareness, be a part of the cure, and help save others from the same disease. She loved dancing, and loved Bobby Darin. So tonight, I'm taking a gamble with a jazzy performance to "Mack the Knife." I know my biggest fans will be watching me from above and cheering me on.

Zebra's identity was revealed on 2/11/21, season 1 episode 7 of The Masked Dancer. See its first interview without the mask here!