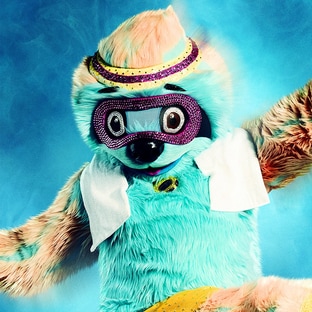 The Sloth appears in THE MASKED DANCER premiering Sunday, December 27 After NFL.

Who Is The Sloth?

You think I'm slow like other sloths? Think again! I'm the muscles from the jungle. Just kidding. I worked hard to get to where I am today. When I was a kid, I had a bad accident. People talked down and dirty to me and said that I was just a Mickey Mouse operation. But I didn't give up. And now I wake up each day stronger than yesterday. And when I'm doing what I love the most, I feel alive. I'm here to inspire a whole new generation to never stop chasing your dreams. But no need to call the feds, OK? If you were ever told you're not good enough or you should give up, then this dance is for you.

Last week was one of the scariest things I'd ever done in my life. Just kidding. That's not hard for stars like me. But I didn't always feel that way. When I was young, we moved to a new place with a new language. I didn't fit in. Eventually, I got a reputation as a bad boy. The truth is, I was afraid to show people the real me. But I took a chance and jumped. And it worked. I learned so much about myself.
So tonight, I'm taking another chance and baring my soul on stage. It's not easy for me to be vulnerable. But if I can make you laugh in the process, then it'll all be worth it.

I may not be new to the dance floor, but this show has made me step out of my comfort zone. It helps that no one knows who I am, especially the judges. But I can't wait for my family to find out. I'm going to do a new dance style every week to get to that trophy, starting with this classic Hollywood jazz number tonight! Now, here's a clue for you.

Interviewer: OK, so Sloth, is he really as funny offstage as he is on?
Dance Partner: This is literally the question I get asked the most. Yes, he really is. I see this guy on tour, and he is hilarious-- what a showman. On tour, he's always so silly. He's a famous comedian. In some ways, it's weird to be teaching him because he's usually the leading man. But I feel like we share the same language, although, technically, I think he speaks three.
Before each performance, we share a quick hug. What can I say? His mama raised him right... which comes in handy when I have to get him to stop looking in the mirror. He thinks he's, like, sex on a stick. But I wouldn't have it any other way. Tonight, we're creating a Bollywood style flash mob with dozens of extras. But with all those dancers, Sloth has to be completely in sync, or else, it's going to look terrible. With a spot in the semifinals at stake, no pressure.

Semi-finals. Not bad for a slightly overweight sloth, eh? I never thought dancing would get me here. But then again, I never thought I would find true love. But both happened. When I was younger, I was kind of a bad boy, even a ladies man. They were incredible leading ladies. But I was lonely until I met the love of my life who taught me that love is magic. Tonight, that magic and my sexy samba moves are going to get me one step closer to another trophy.

When I came into this competition, I waltzed in like a pro. You could say dancing isn't really new for me. But this has been my first time dancing with a partner where I get to be the student. You know what I loved the most? Performing without any prejudgment of who I am. I'm no longer the bad boy. People can't dislike you if they can't see you, right? "Masked Dancer" is like a clean slate. Now, I'm the good man. And I love being able to show Baby Sloth I'm really a big softy. Just my heart, though. I still take pride in my strong muscles. Mah! And now, I'm in the finals. I'm ready to bowl over the competition and rock and roll my way to victory with this jive, my most energetic performance yet. Let's maximize the dancing and win this thing.