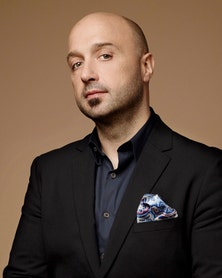 Joe Bastianich is a world-renowned restaurateur who co-owns 16 restaurants across the globe, including Casa Mono, Babbo, Osteria Mozza and Eataly in the Americas (co-partner). He also is an award-winning and best-selling author. Bastianich served as a judge on MASTERCHEF JUNIOR for its first three seasons and returned for its sixth, and on MASTERCHEF for its first five seasons and returned for its ninth, tenth, 11th and 12th seasons.