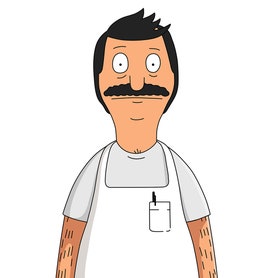 Born in Worcester, MA, H. Jon Benjamin has garnered an extensive list of credits as a writer, producer and actor in some of television’s most entertaining series. Along with his role as "Bob Belcher" on "BOB’S BURGERS", as well as “Sterling Archer” on “Archer,” which earned him a 2010 Emmy Award nomination for Outstanding Voice-Over Performance. He also produced and starred in the cable comedy series “Jon Benjamin Has a Van.”

He most recently appeared in “Wet Hot American Summer: Ten Years Later” and “Master of None.” Benjamin provided the voice of “Dr. Katz’s” lazy son, “Ben,” in the animated series “Dr. Katz, Professional Therapist” from 1995-1999. In 2006, he and David Cross co-created the animated series “Freak Show.” Benjamin also teamed up with Demetri Martin as a writer and co-producer of “Important Things with Demetri Martin.” Other credits include “Home Movies,” FAMILY GUY, “Assy McGee,” “Aqua Teen Hunger Force” and “The Venture Bros.”