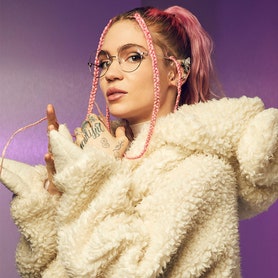 Claire Boucher is the producer of the alter ego Grimes and an award-winning music video director, as well as a music writer, artist, producer, engineer and singer-songwriter. The world got its first glimpse of this vision on her 2010 full-length debut, “Geidi Primes,” which drew its inspiration from the David Lynch adaptation of Frank Herbert’s “Dune.” Her sophomore outing, “Halfaxa,” followed the same year. Over the course of three weeks, 2012’s “Visions” came to life in her apartment and would be recorded solely on Garage Band. 2015 marked a commercial breakthrough on “Art Angels.” It appeared in the Top 5 of year-end lists by Pitchfork, Billboard, Consequence of Sound, The New York Times and Rolling Stone, in addition to being named Album of the Year by Stereogum, NME and Exclaim! In 2018, she made another conscious evolution, turning back to formative influences, such as Tool and Nine Inch Nails for inspiration — a style first hinted at on 2016’s “Suicide Squad” soundtrack contribution, “Medieval Warfare.” In 2020, she released “Miss Anthropocene,” a concept album about an anthropomorphic goddess of climate change, which received rave reviews. The album title stems from the words Misanthrope, “a person who dislikes humankind and avoids human society,” and Anthropocene, “the current geological age, viewed as the period during which human activity has been the dominant influence on climate and the environment.” In 2021, she set the NFT world on fire with the release of WarNymph Collection Vol 1 By Grimes x Mac. The collection contains 10 artworks, including a unique video work set to original music composed specifically for the project. Through the character of WarNymph, Grimes explores the fluidity of identity in the virtual age: the ability to create, augment and splinter ourselves into unlimited avatars.