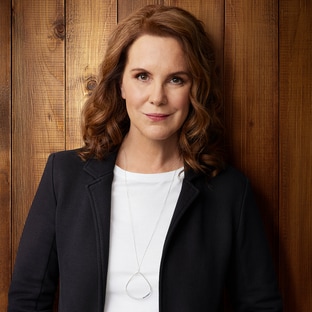 Elizabeth Perkins has distinguished herself with an eclectic mix of roles over the span of her career. Her performance in “Weeds” earned her two Golden Globe nominations, two Screen Actors Guild nominations and three Emmy Award nominations for Best Supporting Actress. Most recently, Perkins was nominated for a Critics Choice Award and won a Gracie Award for her role in the premium cable series “Sharp Objects.”

Perkins currently stars in the streaming series “Truth Be Told,” alongside Olivia Spencer, Aaron Paul and Lizzy Caplan. Other recent television credits include the Emmy Award-nominated streaming series “Glow” and a recurring role in the hit network drama “This Is Us.”

Perkins made her feature film debut in director Ed Zwick’s “About Last Night.” Her breakthrough performance was opposite Tom Hanks in the smash hit “Big,” directed by Penny Marshall. She also received critical acclaim for her performance in Barry Levinson’s “Avalon.” In 1991, she starred in the drama “The Doctor,” opposite William Hurt; and “He Said, She Said,” with Kevin Bacon. She then went on to star in “Indian Summer,” before bringing cartoon character “Wilma Flintstone” to life in the motion picture “The Flintstones.” Perkins portrayed “Dorey Walker” in John Hughes’s remake of the 1947 holiday classic “Miracle On 34th Street,” with Sir Richard Attenborough. She also co-starred opposite Kathleen Turner, Gwyneth Paltrow and Whoopi Goldberg in “Moonlight and Valentino.”

Her other credits include “From The Hip”; “Sweet Hearts Dance,” with Jeff Daniels and Susan Sarandon; Alan Rudolph’s “Love At Large”; “Enid Is Sleeping”; “Lesser Prophets”; Bruce Wagner’s independent film, “I’m Losing You”; “Crazy In Alabama,” directed by Antonio Banderas and co-starring Melanie Griffith, Paul Mazursky and Cathy Moriarty; “28 Days,” opposite Sandra Bullock; “Cats & Dogs”; cable series “If These Walls Could Talk,” opposite Vanessa Redgrave; “Finding Nemo”; “Jiminy Glick In Lalawood”; “The Ring Two”; “Must Love Dogs”; “Fierce People,”  in which she starred opposite Diane Lane; and “Hop,” opposite Russell Brand, Hank Azaria and Kaley Cuoco.

Perkins made her television debut in “For Their Own Good.” Her other television projects include “Baby 2000”; the cable series “The Rescuers”; “What Girls Learn and Speak”; the miniseries “From Earth To The Moon”; the television movie “My Sister’s Keeper,” opposite Kathy Bates; “How to Live with Your Parents,” opposite Brad Garrett and Sarah Chalke; and the U.K. series “One Child.” In 2019, Perkins starred in the premium cable drama “Sharp Objects,” which was nominated for Best Television Limited Series or Motion Picture Made for Television at the 2019 Golden Globe Awards, Limited Series at the 2019 Emmy Awards, Best Limited Series at the Critics Choice Awards and Outstanding Achievement in Movie or Miniseries at the 2019 TCA Awards.