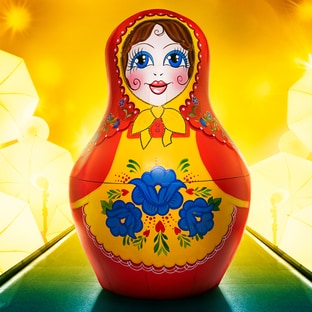 Russian Doll wears a clever disguise with a brightly colored wooden exterior in red, yellow, and blue. Russian Doll is known to multiply into two Russian Dolls. But wait . . . could it be that there are now THREE?

Who Is Russian Doll?

Oh—hey, there. I wasn’t expecting you. You see, I’ve been doing my own thing for quite some time, not like the beginning back when I was the world’s hottest toy. Hmm, those were the days, but I knew I was more than just something to be toyed with—a puppet. And as much as they tried to put me in a box, I just didn't fit. Newer, shinier manufactured toys filled the shelves, so I was cast to the side. And it was the best thing ever. Turns out I can still sell out without being a total sellout, and I'm ready to show there's even more beneath the surface.

Kicking off Season 5 was a total rush! We totally confused the panel with our harmonies. But . . . we haven’t always been in unison. I was doing what I love when I noticed something seriously wrong. I was rushed to the hospital, and there was no guarantee I’d ever be the same. If it weren’t for the glue that bonded us, I may not have survived. The trauma made us even stronger. And now, we don’t take anything we do together for granted.