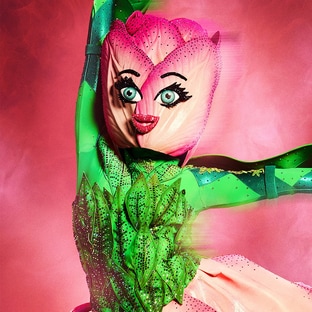 The Tulip is an aromatic breath of fresh air. Its head is a flower, and it is dressed in green with a skirt of pink petals.

Tulip: Hey, guys. I thought I wouldn't have anything to talk about in this video. But then I found this job. I don't want this to sound like one of those good guy, bad guy stories, but growing up, I was teased all the time. My confidence tumbled. But I tried my best to not let trolls get in my head. I packed up my things and found a new, sunnier place to call home–where people were chill with the stranger things about me. For the first time, I felt like I can really breathe and be myself. Tonight, my dance is dedicated to anyone searching to find their place in the world. After all, we're all in this together.

Last time you saw me, I tapped like there was no tomorrow. I felt like a rock star. The toughest part about this competition has been keeping mum about it to everyone I know. And especially to my best bud. We used to be super competitive. I could see she was so great at everything. I want everyone to see me the same way. Eventually, we realized, why waste time arguing? Am I right? Now day and night, she's always there for me through my struggles. And whenever I feel frozen in place, she's the one to hype me up. And she taught me that to connect with people, I have to be vulnerable and show emotion, which is very different from my first performance. But that's exactly what I'm going to do

So it's the Super Six. This competition just got real. Believe it or not, I never really enjoyed competing. But since being here, I'm starting to fall in love with performing again. I've done tap, I've done an emotional dance. But tonight I'm going back to some of the first dancing I ever learned.
Oh, and one more thing-- bring it on.

Oh, man. I have loved spending so much time with Tulip. She's basically my new best friend. We have a secret handshake we do before each performance to get fired up. We're so close, she even invited me over to watch the premiere of "The Masked Dancer." I'm constantly impressed that Tulip can pick up any dance style. She can work it. But that kind of runs in the family. For tonight's dance, we're doing what best friends do. That's right. We're having a slumber party right in the middle of the stage. If we can keep in sync and do justice to this classic song, she's going to make it to the semifinals. There's no stopping this Tulip.

I can't believe I made it to the semi-finals. I'm pretty sure I'm the youngest left in the competition. Some things never change. But through it all, the one person I've truly miss in my best bud. She may have taken home more trophies than me, but I still love her so much. And we haven't had the chance to talk about our latest crushes in forever. We need to hype back in the house. But first, this week, I'm dancing the polka. A polka? This is crazy. I've never done polka in my life. But my best bud would double dare me to nail this, so here we go.

Becoming Tulip on "The Masked Dancer" has truly been wonderful. And now that I'm in the finals, I'm realizing just how much I've blossomed. From the very start, I came out here with something to prove. So I made sure I showed off all my dance skills. Being the youngest in a talented family, it's easy to feel overshadowed and compared to the person I look up to the most. But making it this far, I've proved that I can shine on my own. I'm so excited for this final performance. The competition is so on. Even though Sloth is a pro on the dance floor and Cotton Candy is a fierce competitor, I have to remember I'm in control. So for my grand finale, I'm pulling out all the tricks to prove that I'm the queen of this dance floor. Kids, tonight, I'm bringing home the trophy. See you soon. He, he.

Tulip's identity was revealed on 2/17/21, season 1 episode 9 of The Masked Dancer. See its first interview without the mask here!