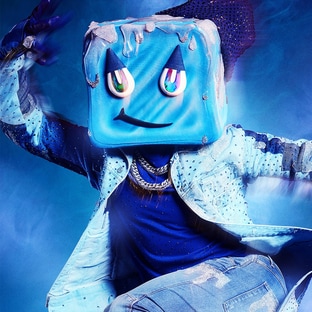 Ice Cube is as cool as it gets, rocking an ice blue outfit and a gold chain around its neck. Its undershirt is dark blue, and it has purple accents on its shoes and gloves.

Who Is Ice Cube?

Hi, I'm the Ice Cube. And welcome to my chill paradise. I'm pretty successful now, but the road to get here was slippery. Even though we had money, I was home alone and isolated. My mom was always off doing important work. And my pops spent real time behind bars. The TV was my only friend. But I had to find a way to make it work. So I fashioned an escape plan. By making peace with my parents and working my ice cold butt off, my dreams came true, and I finally feel in my element. So if you ever want to climb an ice mountain, just remember-- don't do it for fame. Don't do it for money. Do it to help make this cold world a better place.

Ice Cube's identity was revealed on 1/6/21, season 1 episode 2 of The Masked Dancer. See its first interview without the mask here!