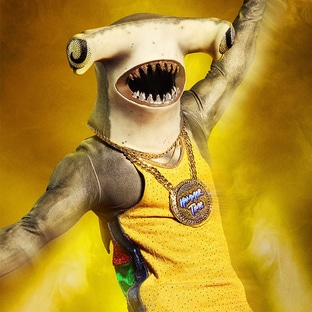 The Hammerhead wears red short shorts and a yellow tank top. Around its neck is a massive golden amulet.

As a shark, I've always been killing it. I'm a workaholic. But things have never come easily to me. I made them happen. I became famous almost too quickly. That early fame? It felt great at the time, but then it started to feel like my best moments were behind me. I had departed from who I was and shifted into who I thought everyone wanted me to be. I realized I just wasn't happy. So now, I'm visiting everything I missed out on. I swim away from what comes easy and straight towards everything that used to scare me. I pumped the brakes on where my life was headed. Now, moving backwards is the way I move my life forwards, staying hungry for learning, for love, and for life.

The best part about this experience is being here on my own terms. And last time, I really wanted to show I could be the life of the party. But people already know that side of me. So this time, I'm going to show I'm so much more. I have layers. Years ago, when I first entered the public eye, I had one shot, one opportunity. I didn't want to lose myself. But I sort of did. I gave up my dream of being a lawyer. I was depressed, like I was locked in a cage. Eventually, I realized that in order to succeed, I had to embrace both parts of me: my fun-loving side and my disciplined side. And this performance is a combination of both. Fear is no longer a factor for me. Though the dance steps are really hard. I finally found my purpose in my situation. To earn my spot in the Super Six, get ready to see a different side of my heart. Hammerhead out.

I can't believe I made it to the Super Six. I might not be the best dancer, but I am loving this. I do not want to go home. In my mask, I can finally let loose, and it's liberating. Tonight I'm doing the [INAUDIBLE]. Remember, when you mess with the bull, you get the horns. Or in my case, mess with the shark, you get the teeth. And since this bull fight is BYO clue, who wants to get my back?

Hammerhead's identity was revealed on 1/27/21, season 1 episode 5 of The Masked Dancer. See its first interview without the mask here!