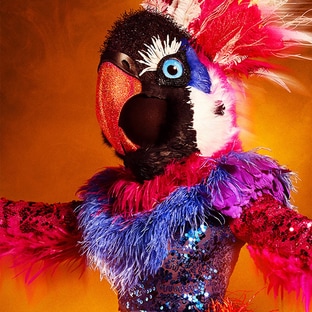 Exotic Bird is covered in red, blue, purple and orange feathers—with a fiery headdress perched upon its head.

Who Is Exotic Bird?

Narrator: Deep within a secluded tropical terrain, we find a species of bird in their natural habitat: at the top of a racetrack.

Exotic Bird: Hey, who said that?

Narrator: A racetrack. This is an athlete.

Exotic Bird: Get outta here! This is my story. I'm Exotic Bird, and here's a few things about me. As you can probably tell, I'm a little competitive. I started when I was a teenager. I was lucky enough to win big pretty quickly. But it definitely wasn't easy after that. I felt attacked a lot for losing, for my relationships, even just for being a big bird. But I'm not going to let those shamers control my life. Win or lose, I will keep flying. OK, Narrator, back over to you.

Visual clues: Glitter gun, perfume, carton of eggs with ‘best by 07’ printed on the side.

Every single day I'm onstage is a good day. Last round, my confidence was overflowing. But that wasn't always the case. Right before the biggest opportunity of my life. I got really sick with a savage bird flu. I could barely breathe. There was only one person who could help me, my mama bird. She told me, "Baby, what you were born with nobody else has. That's your gift. And right now, it's up to you if you're going to share it with the world. This moment will define who you are for the rest of your life." With her support, I went out and served up something legendary. As my mama told me, these hips don't lie. Tonight, my performance matches the roller coaster ride of my life. These dance steps are so hard, pushing and pulling me in different directions. But with every beat of the song I hit, I will stand more fierce on my own. Nothing will get in my way of the Super Six.

When this competition started, I was super stressed. I've been made fun of before for my dancing. But when the music began, all I thought was the rhythm. Life has really changed since I became a mama bird. But being under the mask has allowed me to rediscover my sultry side again. But now that I'm in the Super Six, this stripped back duet is going to prove to everyone, including me, that I can dance. OK, ready for your super clue? Bye, loves!

Oh, man, I've always been such a big fan of Exotic Bird. She's amazing. But that doesn't mean I've gone easy on her. Each performance, I've pushed her limits, and she's gone above and beyond.

She has the biggest heart and is so giving. When she talks about being a mama, it's heartwarming. Every step she dances is for that baby bird. Tonight, we're putting some extra clues on stage, so keep an eye out. But also, we're dancing to a song by one of her idols, our very own Paula Abdul. It's a huge risk. But if she can pull this off, there's nothing stopping her from making it to the semifinals.

Exotic Bird's identity was revealed on 2/3/21, season 1 episode 6 of The Masked Dancer. See its first interview without the mask here!