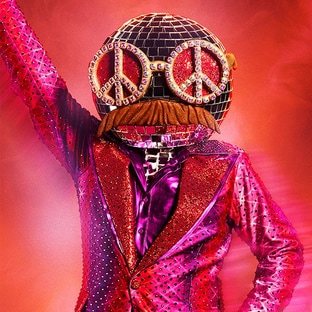 The Disco Ball’s costume consists of a glittery, 70s-era suit. Plus, peace sign sunglasses and a mustache on its disco ball-head.

Who Is Disco Ball?

Some people think they know everything about me, but I'm here to show off my true colors. I grew up on a rough block and lost both my parents at a young age. But once I discovered my passion, my life changed for good. It's been my fountain of youth, my miracle. Now, I pour everything into my family. Everybody counts on me. I wake up ready to serve and protect. I'm no stranger to the spotlight, but I'm not expendable just yet. I'll keep disco balling all night

Visual clues: Dog bone with the letter ‘J’, a shark fin, a gavel