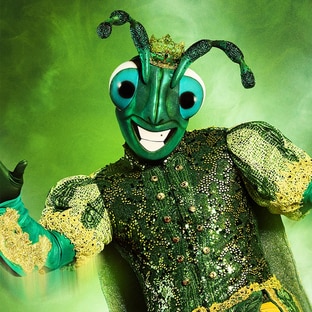 The Cricket is a lean, green, dancing machine. A dark green garb covers most of its exoskeleton, with yellow and light green sleeves.

Honestly, I never thought I would do a show like this. Me, Cricket, dancing? No way. But I've always bet on myself. I had to give it a try. I've been pretty lucky in life. But when it came to love, it always felt like I was getting punked. I needed support, a foundation to stand on. But then, it was love at first sight. I hit the jackpot and we became the ultimate power couple. She taught me the art of balance. Tonight, I'm ready to jump for my love.

My last performance, I dove into the competition head first. And tonight, I'm turning up the energy with a '90s style routine that brings me back to where I got my start, when I got my big break. When I was little, I thought I had something special inside me. But you weren't allowed to be different in the community I grew up in. I felt so judged. But I took a chance and did something just for me. It was risky, like a knight going into battle. I could have blown it and had to start back at 1. But it worked! I saw my way to stardom. And now that I'm finally being heard, nobody's gonna stop me.

Word Up word: All star

Cricket's identity was revealed on 1/20/21, season 1 episode 4 of The Masked Dancer. See its first interview without the mask here!