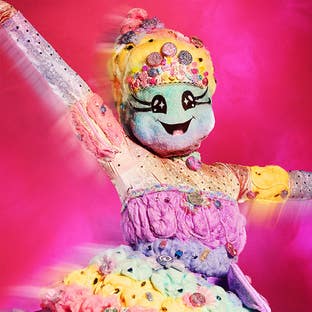 The Cotton Candy brings the color to the dance floor. Its costume is technicolor from head-to-toe, touting every color of the pastel rainbow.

Who Is Cotton Candy?

I'm definitely a perfectionist. But things in my life haven't always been so sweet. Growing up, I was kind of an all-around whiz kid. I had big plans. But in order to chase my dreams, I had to move in with a new family. I was just a kid. And I got so homesick. I had trouble keeping up. But if I learned anything in my life, it's when times get tough, I can't just quit. I'm a fighter. And my new fam gave me a safe haven to keep going. With their support, I'm feeling more glamorous than ever. And now, nothing can stop me from being at the top, even after what happened at my rehearsal yesterday. Again just with the come down, with that transition, keep spinning and keep moving.

Well, that didn't exactly go as planned. It was a scary fall. But you think I'm going to let one fall stop me? No way. I'm used to setbacks. I grew up in a place where life was carefree and simple–for everyone but me. It was so hard to balance practice with everything else in my life. I missed out on so many milestones. And I started to feel iced out from kids my age. I even missed my high school prom. It made me want to scream sometimes. But all these years later, I'm truly grateful for those sacrifices. 'Cause I made it here. And once again, I'm taking a big risk. My last performance, it was just me and my partner. But tonight, I'm with a group of the most talented dancers. So I have to stand out and show the panel why I deserve a spot in the Super 6.

Wow, Super Six! I'm no stranger to competition, but this has been different. After my fall, I wasn't sure if I could even keep on dancing, let alone make it this far. I think you are showing that you have a winner's attitude, and I think you're going to be here for a long time. Some haters in the past said that I can't dance. But I'm about to get do a crazy fun swing performance that will change their minds. Also, here's a little piece of me.

Cotton Candy is so inspiring. Dancing in these costumes is hard. But she is determined to get it right. Every night after rehearsal, she goes for a three-mile run in her mask just so she can get used to it. Now, that's dedication. I was so scared after her fall. For anyone else, that might have meant hitting rock bottom. But she vaulted back to her feet like a hero. And now she's on fire. The story of tonight's dance is Cotton Candy is late for her ballet rehearsal. But that forces her to break out into her own. It's a huge risk. Ballet is hard. But if she can pull it off, semifinals, here we come.

I can't believe I made it to the semi-finals. But the theme of tonight's show makes me a little nervous. Love has often taken a backseat in my life. I'm always rehearsing. I started on this path when I was six. Before you know it, four years of my life had just flown by. To be honest, when you travel a lot, relationships can flame out. But enough about love. I've got a cheer packed stomp performance to do. There's so many precise steps. If I got even one wrong, the entire performance will be blown. But if I get them right, I'll be stomping right into the finale.

Before "The Masked Dancer," my world was full of judgment. I was always told, not good enough, be better. So this experience has been life-changing. I have never felt more powerful. But not everything has been a perfect 10. After the fall, all of my insecurities flooded back. But I know hard days are when champions are made. And I am a champion. And even though Tulip and Sloth are more at home on the dance floor, my training gives me the courage to soar. Being in the finals has sparked a fire in me to win this whole thing. So for my final performance, I'm bringing something to the table that no one else can. And look, it's raining. I have deja vu. Mama always said the rain means one thing. Today is going to be a big day. Fingers crossed.

Cotton Candy's identity was revealed on 2/17/21, season 1 episode 9 of The Masked Dancer. See its first interview without the mask here.