Back to The Last Man on Earth 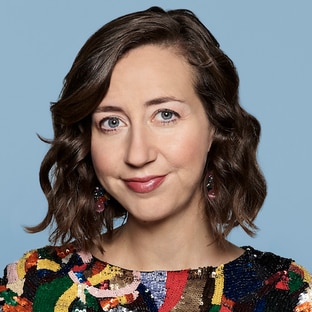 In addition to her work on THE LAST MAN ON EARTH, Kristen Schaal voices the character of “Louise Belcher” on FOX’s Emmy Award-winning animated series, BOB’S BURGERS.

On film, Schaal recently was seen in the indie comedy “All Nighter,” alongside Emile Hirsch and J.K. Simmons, as well as in “Austin Found,” opposite Linda Cardellini and Patrick Warburton. She also appeared in “A Walk in the Woods,” opposite Robert Redford and Nick Nolte, and the Melissa McCarthy comedy “The Boss.” Schaal made numerous appearances as the “Senior Women’s Correspondent” for “The Daily Show with Jon Stewart,” tackling topics such as sexism, gender wage equality, political campaigns and “Dad Bods.”

In 2013, Schaal released her own one-hour comedy special, “Kristen Schaal: Live at the Fillmore.” Previously, Schaal starred as “Mel” on the Emmy Award-nominated cable series “Flight of the Conchords,” and as the buzzed-about “Hazel Wassername” on “30 Rock.” Her additional film and television credits include “Gravity Falls,” for which she won an Annie award, “Dinner for Schmucks,” “Mad Men,” “The Hotwives of Orlando,” “Modern Family,” “Glee,” “Freak Show” and “Comedy Central Presents: Kristen Schaal.”

Her additional voice work includes THE SIMPSONS, “BoJack Horseman,” “Zodiac,” “Toy Story 3,” “Cloudy with a Chance of Meatballs 2” and “Despicable Me 2.” In 2010, Schaal co-authored her first book – the sex guide “The Sexy Book of Sexy Sex” – with her husband, Rich Blomquist. She currently resides in Los Angeles.