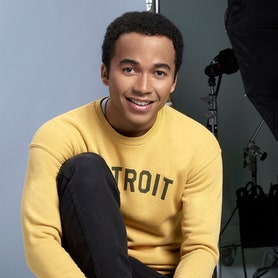 Raymond Cham, Jr., is an American actor and dancer who was born in Los Angeles. He has always had a passion for acting and dancing and has performed on numerous shows and specials, including “Dancing with the Stars,” FOX’s SO YOU THINK YOU CAN DANCE and “TeenNick HALO Awards,” alongside artists such as Taylor Swift, Selena Gomez and The Weeknd.

His notable credits include the cable series “Mech-X4,” the telefilm “Teen Beach 2” and the Kerry Washington-produced series “Five Points.”

His other acting credits include guest-starring roles on “Sneaky Pete,” “Grey’s Anatomy” and “Criminal Minds: Beyond Borders,” as well as feature films “Bloodline” and the 2021 Sundance hit “How it Ends.”

Cham resides in Brooklyn, NY, and enjoys creative writing, working on scripts for film and TV, skateboarding and hiking.