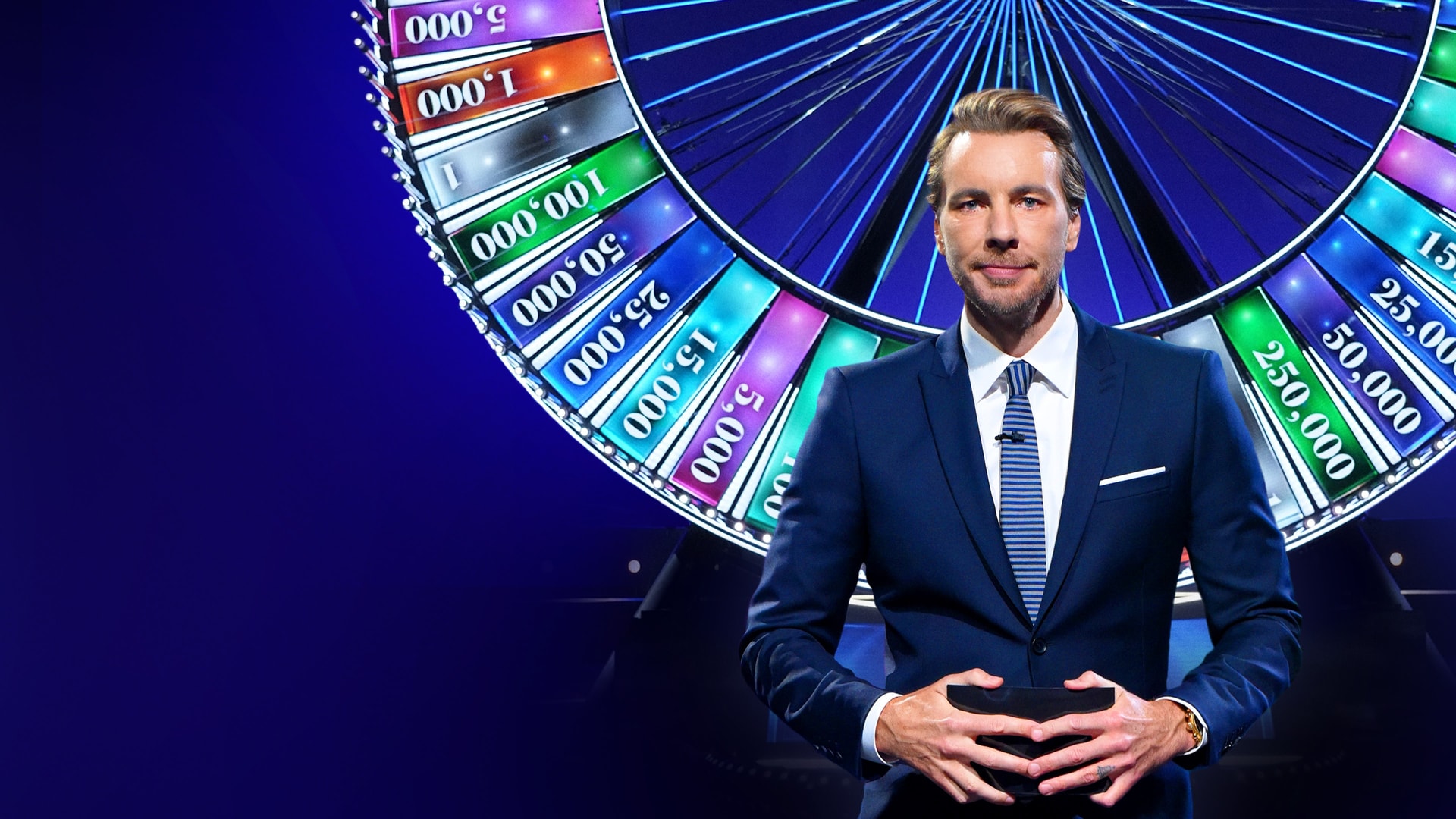 NEW POP CULTURE GAME SHOW “SPIN THE WHEEL,”
EXECUTIVE-PRODUCED BY JUSTIN TIMBERLAKE,
AND HOSTED BY COMEDIAN DAX SHEPARD,
TO AIR DURING THE 2018-2019 SEASON ON FOX

New Game Show Offers One of Biggest Prizes in Primetime History;
Opportunity to Win More than $20 Million in Cash Per Episode

FOX has ordered SPIN THE WHEEL, a high-stakes game show offering a chance to win over $20 million per episode. Executive-produced by Grammy and Emmy Award-winning musician and actor Justin Timberlake, and hosted by actor, director, writer and comedian Dax Shepard (“Hit and Run”), the show offers life-changing opportunities to win fortunes each episode with the spin of a massive, unpredictable wheel. The show, created by Timberlake and Andrew Glassman (“The Wall”) of Glassman Media, is scheduled to premiere during the 2018-2019 season on FOX.

“This show is massive on so many levels and has the ability to change people’s lives,” said Rob Wade, President, Alternative Entertainment and Specials, Fox Broadcasting Company. “We have a charismatic and hilarious host in Dax, an uber-producer in Andrew, an insanely creative global superstar in Justin and one of the biggest prizes in primetime history. We can’t wait to SPIN THE WHEEL.”

“SPIN THE WHEEL is the opportunity of a lifetime, and every time someone spins, a massive fortune is on the line,” said executive producer Andrew Glassman. “This is all about a rollercoaster of emotions, positive energy and some incredible wins.”

“I can’t think of a better job than giving out millions of dollars to nice people,” said host Dax Shepard. “It’s my chance to finally be Willy Wonka.”

A suspenseful, high-energy mix of pop culture trivia, strategy and simple whirling luck, SPIN THE WHEEL pits contestants against a colossal, spinning 40-foot wheel that holds incredible sums of cash prizes in its rotation. Throughout the game, players will answer trivia questions – each correct answer adds more extreme amounts of cash in the wheel’s wedges in a strategic location of their choice, while each incorrect answer adds more dangerous wedges that could instantly bring their total back to zero. With massive prize money on the line, contestants must make sweat-inducing, gut-wrenching decisions: whether to walk away or risk it all to SPIN THE WHEEL one last time.

Multi-talented actor and musician Justin Timberlake has sold over 32 million albums worldwide, sold out arenas all across the globe, received numerous awards and nominations and become one of the most highly respected entertainers in the business. Timberlake released the 4X Platinum-selling song “Can’t Stop the Feeling!” from the film “Trolls,” which debuted at No. 1 on the Billboard Hot 100 and became the singer’s first No. 1 debut on the chart and ultimately the best-selling U.S. single for 2016.  Additionally, it marked Timberlake’s 10thGrammy Awardand garnered a nomination for an Academy Award and Golden Globe Award. Timberlake released his highly anticipated fourth solo album, “Man Of The Woods,”in February and is currently on his sold-out world tour in support of the project. A gifted actor, Timberlake has appeared in diverse films, including “Alpha Dog,” “Black Snake Moan” and “Shrek the Third.” He won strong reviews for his performance in the Academy Award-nominated “The Social Network.” Timberlake also has won four Emmy Awards for his appearances on “Saturday Night Live.”

While attending the University of California Los Angeles, Detroit native Dax Shepard trained at The Groundlings Theater for improv and sketch comedy, and landed his first TV role on “Punk’d” in 2003. Since then, Shepard has appeared in multiple films, including “Without a Paddle,” “Idiocracy,” “Employee of the Month,” “Baby Mama,” “The Judge” and “This Is Where I Leave You.” He wrote, directed and starred in three films: “CHIPs,” “Hit and Run” and “Brother’s Justice” (co-directed by David Palmer). He also starred in the network television drama “Parenthood,” for which he received a 2015 People’s Choice Award nomination. Shepard recently completed production on the FOX comedy pilot BLESS THIS MESS, opposite Lake Bell. He also recently launched “Armchair Expert,” a podcast in which he talks with some of the most iconic creative personalities around the world.

Glassman Media is an independent Los Angeles-based international television production company whose credits include game show “The Wall” (NBC), produced in partnership with LeBron James, Maverick Carter and their production company, Spring Hill Entertainment. Other credits include dating series “Average Joe” (NBC); unscripted series “Three Wishes” (NBC); the dating franchise “Sweet Home Alabama” (CMT); and the recent reboot of “Battle of the Network Stars” (ABC). Adaptations of Glassman Media original formats have been done in territories around the world. Glassman Media was founded by Andrew Glassman in 2001, following his successful career as an Emmy Award-winning investigative broadcast journalist, during which time he appeared on-air at NBC News, CNBC, MSNBC, WCAU and WNBC.