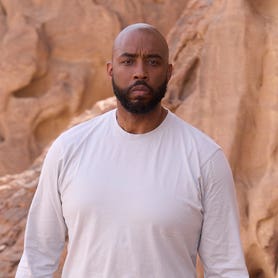 Montell Jordan’s first musical offering, “This Is How We Do It,” was a breakout song in 1995 that topped the Hot 100 for seven weeks and R&B charts for eight. Over his nearly twenty-year career in music, Jordan has released eight studio albums, 14 singles, two gospel projects, and is a Grammy-nominated artist, selling more than 10 million records worldwide, also credited with achieving five certified Billboard #1 records. He garnered Songwriter of the Year awards, Grammy, Soul Train and Dove Award nominations, owned a record label and sold-out major tour venues all over the world. Jordan has authored two books, his autobiography, “Becoming Unfamous,” in 2016 and a marriage book in 2017 that he co-authored with wife Kristin Hudson, titled “This Is How We Do It!: Making Your Marriage A Masterpeace.” Jordan and Hudson have founded Marriage Masterpeace Inc., a 501(c)3 non-profit organization helping public and high-profile marriages heal privately. He stepped away from the music business in 2011, entering fulltime ministry. Today, Jordan is a pastor, speaker, teacher, motivator and still tours the world performing before sold-out audiences in stadiums around the world. He is Co-Pastor of Master Peace Church, a house church providing virtual ministry to transform living rooms into houses of worship around the world.