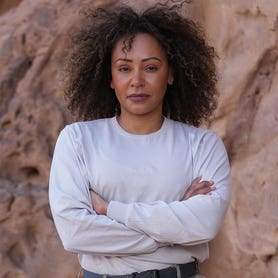 Melanie Brown MBE, a.k.a. Mel B., began her career with the pop phenomenon that spearheaded the Girl Power movement, The Spice Girls, which is the most successful girl group of all time with 100 million records sold. As “Scary Spice,” she became one of the most recognizable women in the world, as she went on to carve out a global career as a television entertainer, theatre performer, movie actress and author. In 2019, she reunited with The Spice Girls on tour - the most successful tour of that year. 2021 marks the 25th anniversary of the group and their first massive hit, “Wannabe.” After The Spice Girls split in 2000, Mel B. went on to appear as a judge on “America’s Got Talent” and “The X Factor” (UK). Additionally, she appeared in “Lip Sync” (UK), “The X Factor” (Britain and Australia), “Dancing With The Stars” (Australia), “America’s Got Talent,” “The Masked Singer” (Australia) and “Queen Of The Universe.” She also starred in the film “The Seat Filler,” and has appeared on Broadway in “Rent” and most recently as “Roxie Hart” in “Chicago,” winning massive acclaim from audiences and critics alike. In 2018, her explosive book, “Brutally Honest,” was published and rose to the top of the best-seller charts, turning Mel B. into a powerful figurehead for victims of abuse everywhere. She was made Patron of Women’s Aid in 2018, and in 2019 was invited by the British Prime Minister, Theresa May, to help her work on a parliamentary bill designed to aid other victims. This year, Brown was awarded an MBE by the Queen for her services to survivors of domestic abuse. She is the mother of three girls and lives in her hometown of Leeds, United Kingdom.