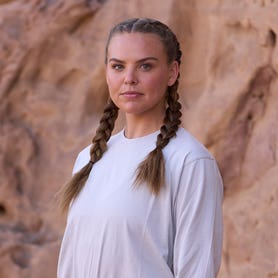 Hannah Brown is a television personality, lifestyle expert and New York Times best-selling author. Born and raised in Tuscaloosa, AL, Brown became Miss Alabama USA in 2018 and used her platform to advocate for mental health awareness, voicing her own experience of battling depression and anxiety during her teenage years. Following her time as Miss Alabama USA, Brown appeared on Season 23 of “The Bachelor” and went on to become a fan favorite, appearing as “The Bachelorette” on Season 15 of the franchise – even winning a People’s Choice Award for her role on the show. She next appeared on Season 28 of “Dancing with the Stars,” where she won the competition. Brown published a personal memoir in 2021, “God Bless This Mess,” which became an instant New York Times best seller. She followed up her first book with the publication of a companion journal in 2022, “God Bless This Messy Journal.”