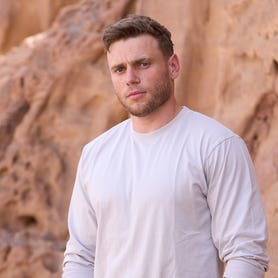 Gus Kenworthy is a British-American park freeskier, actor, model and advocate. Kenworthy is known as one of the best all-around park skiers as he has podium finishes across all three disciplines (slopestyle, halfpipe and big air) and is accredited with groundbreaking tricks in each. In 2014, Kenworthy won a silver medal for Team USA at the Sochi Olympic Games. In 2015, Kenworthy came out on the cover of ESPN Magazine and became the first openly gay professional athlete in any action sport. At the 2018 Olympics, Kenworthy made history by becoming the first openly gay man (alongside Adam Rippon) to compete for the U.S. in a Winter Olympics. In 2019, he landed a series regular role on “American Horror Story: 1984.” He also has appeared on “Will & Grace,” “Olympic Dreams,” “Drop The Mic,” “The Challenge and “Coming Out Colton.” He also has been a guest judge on “RuPaul’s Drag Race,” “Top Chef” and “Beat Bobby Flay.” Kenworthy resides in Los Angeles with his partner, Adam, and their dogs, Birdie and Frank.